It’s hard to decide where to purchase a second home. How do you choose between lake or oceanside? Urban or rural? A ski cabin or a warm respite from winter? But what if you didn’t have to?

More and more people are opting for homes on wheels these days, whether it be a van, RV or even a converted school bus. Some are weekend warriors, others work remotely on the road and there are those who have quit their jobs entirely to embark on what they call the journey of a lifetime.

Alexis Nascimento has done all three. She and her husband, two sons and dog used to spend the weekends road tripping in a passenger van with removable seats from their home in California’s Central Valley. But leaving after work on Fridays and preparing for the week when they returned home on Sunday evenings took a toll. The couple sat down to craft a family mission statement and determine what they wanted out of life.

“At the end of our lives, what do we want to be able to rest our head on and know that we lived a good full life,” Nascimento said. “And we didn’t feel that was the life we were living. My husband said ‘what if we shake it up and do something completely different and become full time travelers.’ And at first I thought it was insane. A couple days later I was in.”

The couple gave themselves one year to prepare, selling their four-bedroom house and offloading almost all of their possessions.

“Basically if it didn’t fit in the van, we got rid of it,” Nascimento said. “We really wanted to cut that tether that would potentially keep us from really going out and exploring and testing our limits. We figured if we had these things holding us back in our hometown, we might be more apt to quit.”

In 2019 they hit the road, and have been writing about their experience since. 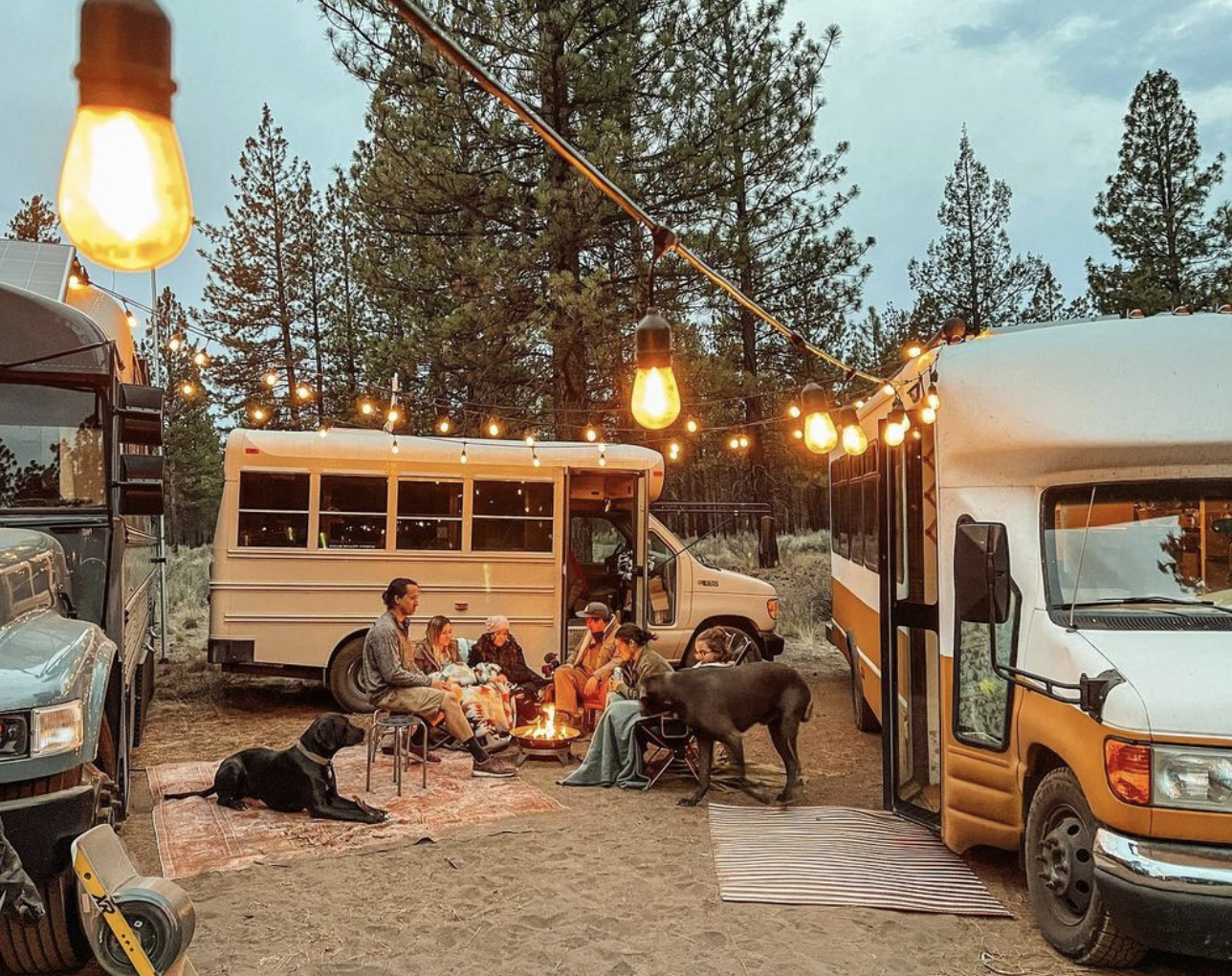 Kim and Ethan Weiss with their dogs and skoolie friends. Photo: Kim Weiss

Kim and Ethan Weiss met in January 2018. Ten months later they bought a school bus off Craigslist for $2500 and spent the next 15 or so months converting it into a home for them and their two Great Dane mixes. They estimate they did about 95% of the work themselves, spending roughly $20,000. In doing so, they joined the ever-growing community of “skoolies,” people who renovate old school busses for life on the road.

Like many skoolies, they were driven by a desire to live a more flexible lifestyle, and to redefine the definition of what a “normal” life is and encourage others to follow their dreams.

“It’s getting more popular. I think it’s a lot of seeing it more on social media and wanting to make it a reality for yourself,” said Kim, who shares her experience from the Instagram account @justanotherskoolie. “Just knowing that other people are out there and they’re able to do it makes it seem a little less scary.” 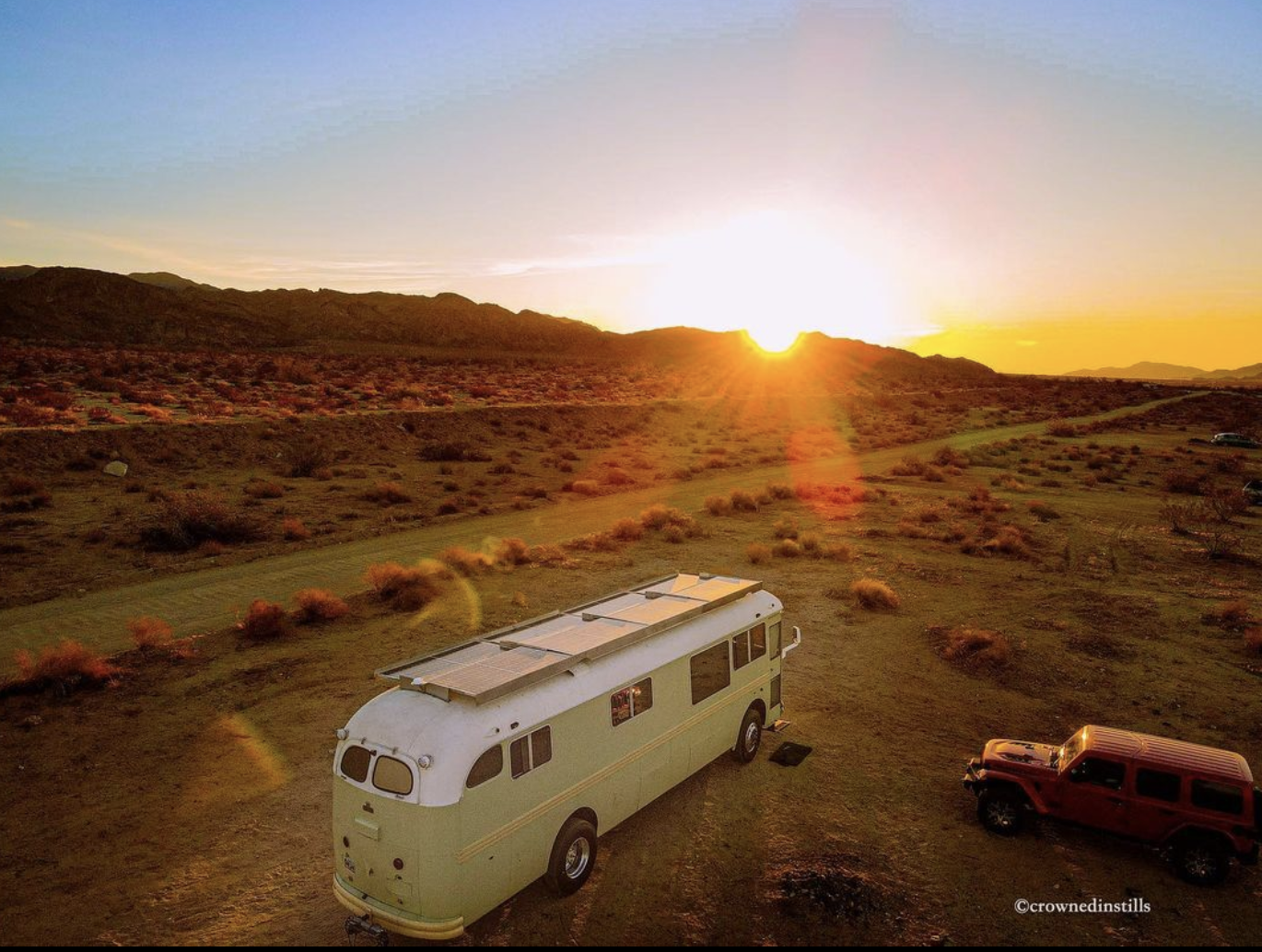 Josh Jackling didn’t learn about the close-knit skoolie community until he and his wife were done converting their 1954 bus.

“When we finished converting it we found all these people on instagram doing it,” He said. “We had been working on it for all these years and didn’t even realize there were all these people out there doing van life, bus life and all of that. One of my dreams was to travel the country in the bus, and so we said, why wait?”

Jackling came into skoolie life by accident, purchasing the bus from his grandma when he was 15. She and his grandpa were early pioneers of the lifestyle, driving all over North and South America in the bus in the 1970s.

Now in his 40s, Jackling and his wife, Carolyn, are seven months into their two-year plan of driving around the country, having visited Arizona, Utah, Idaho, Wyoming, Montana and Oregon, so far. After, they will migrate to Europe. It’s unclear, he said, if the bus will be joining them.

As it turns out, the most rewarding part of life on the road for Jackling has been the unexpected community.

“We love meeting people and getting immersed into their lives so quickly,” he said. “If you meet someone and end up camping together, and maybe you didn’t even know them before that, you just get 100% immersed in their world. And for me that has been the biggest reward.”

The Jacklings’ journey hasn’t only been smooth sailing though. He installed a brand new engine before the trip, which ended up costing them three months of bus life off the bat due to a faulty part.

“I think there is a learning curve to it and I think it takes getting over the hump,” Jackling said. “I’ve seen some people quit bus life or really struggle with it because it’s not looking the way they thought it would look.  And you eventually get to be OK with things that are normally scary. Because it is worth it.” You can follow his adventure at @crownedinstyle.

With remote work becoming a more permanent part of our culture,  more and more people are flirting with the idea of living — at least part time — on wheels. The most common refrain of advice from those already on the road  is just to do it.

“If somebody’s interested in doing this lifestyle, make a plan and know what you are trying to achieve with that plan, whether it’s more quality time with the family or seeing some of the most amazing places the world has to offer,” Nascimento said. “It’s really not as difficult as people make it out to be, you have to give up a lot, you have to sacrifice a lot, but it is something that everyone should experience once in their lifetime, whether they do it for the summer or they do it for the year. Taking that leap of faith is so scary in that moment but we have never looked back.”